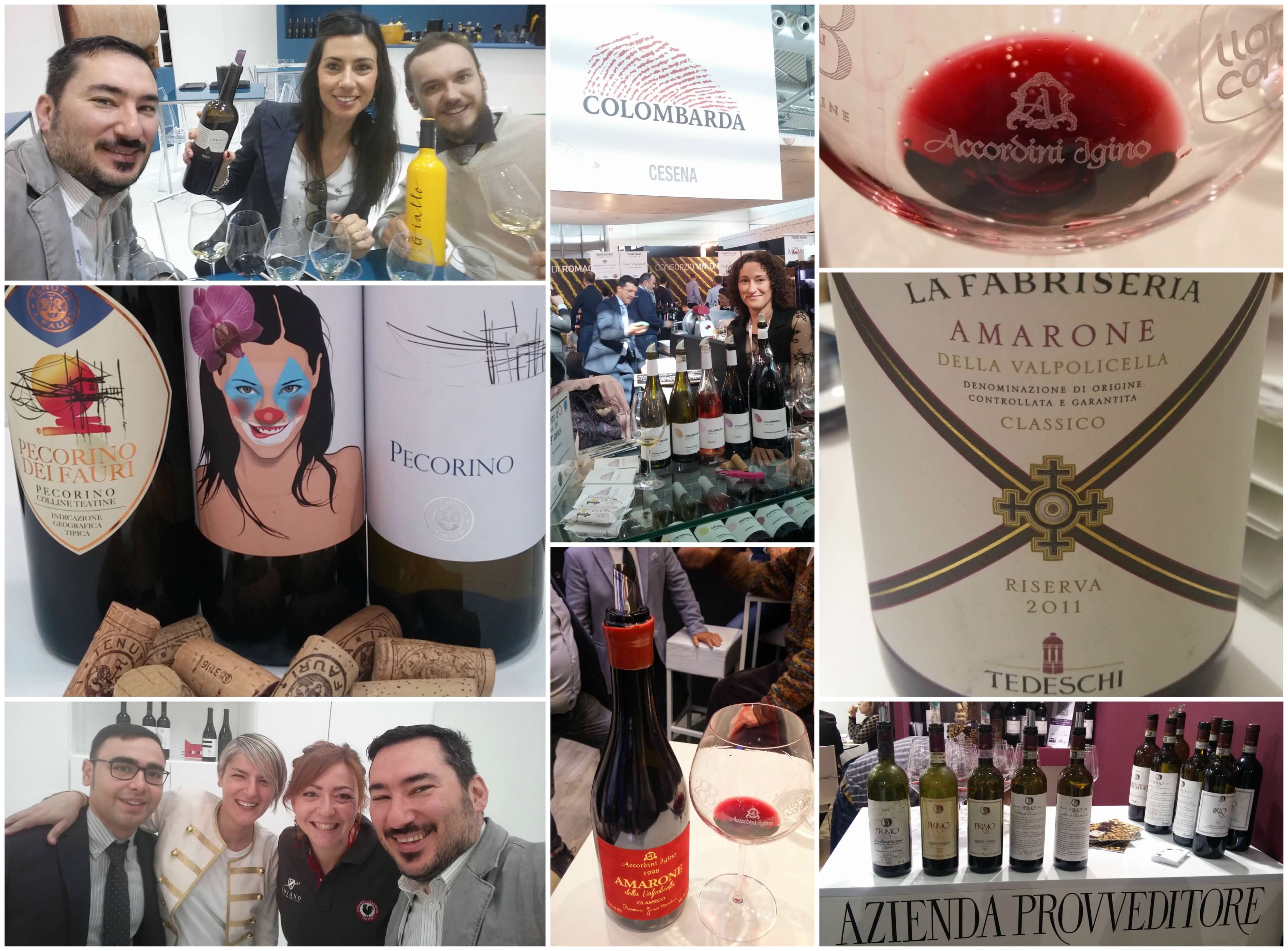 I’ve allowed my sensations to “decant” just two months since Vinitaly. I’m now ready to put to paper (and to Podcast) the most interesting tastings in 2017, rich in experiences and personal gratification.
The following is my summary of those tastings, with various notes taken on each new tasting and others with which I was already familiar.

Valentina Di Camillo and her brother Luigi are a breath of fresh and innovative air for Abruzzo in terms of how they communicate and for their willingness to develop a concept of absolute quality, which they dedicate particularly to Montepulciano. But also for the risk they are taking in ageing as trendy and interesting a grape variety as Pecorino.

Pagadebit, Albana, and Sangiovese di Romagna, all single grape productions aged in steel tanks to give as precise an idea as possible of these local varieties in search of a worthy place in the market. The company is young, but promising (it’s in the third year of production despite the fact that its origins go back to the 1800s). The wines have clean and crisp notes: the Pagadebit 2015 is pleasant; the Albana 2015 is very interesting, with medium body and complex aromas; as is the fresh and flavorful Sangiovese rosé “Rosalaura” 2015, which also comes in a red variety (2015) that’s perfect for food pairings.

With Michela Muratori, a veritable whirlwind of ideas and originality, packaging and production choices are constantly evolving. Consider that their Simbiotico project is active in all three proprietary estates (Villa Crespia, Rubbia al Colle, Oppida Aminea). What exactly does “Simbiotico” mean? “For over 17 years we’ve been “nourishing” our vineyards with microbiological diversity (fungi and bacteria), and today we have vineyards that are bountiful, healthy and resistant to disease. Simbiotico means reducing synthetic products, but it also means engaging in a positive and conscientious relationship with nature.” So it’s something different from organic or biodynamic, though the vineyards are still under conversion. Nonetheless the praises are coming in, with the Simbiotico di Rubbia al Colle 2013 (Tuscan IGT Sangiovese), which received an award in the Wine Without Walls section of 5 star wines 2017 at Vinitaly; also the Millè di Villa Crespia (Franciacorta Millesimato aged 30 months in stainless steel tanks with fine lees before being bottled for the second fermentation, 100% Chardonnay); and the “yellow” varieties of “Giallo” di Oppida Aminea with yellow-colored bottles containing Campania IGT (Fiano, Greco, Coda di Volpe).

Sabrina Tedeschi is head of the Famiglie dell’Amarone dell’Arte and represents a clear vision for this wine. With the La Fabriseria line, which, since first entering the market in 1983 has only produced 8 vintages, the Tedeschi family reaches the zenith of this idea. The Riserva 2011 maintains ripe fruit notes that one would expect from Amarone, is smooth on the palate, but then explodes in body and acidity, resulting in a tasting that is complex, but not tedious. Elegant and powerful.

Since 1800 in Valpolicella, particularly with the Le Bessole cru, Accordini Igino offers traditional Amarone, but also some laudable innovation. Such as 100% Corvina “Le Bessole – Corvina Veronese IGT 2011” (the production guidelines allow up to 10% of Corvinone), with slightly robust spice notes, but soft on the palate and with good acidity. Ripasso and Amarone are the principle focus for this producer, who brought to Vinitaly an Amarone della Valpolicella Roserva DOC 1998 with ripe fruit notes and preserves, balsamic and ending with notes of alcohol preserved fruit for an extremely exhilarating olfactory experience. It is velvety on the palate, but persistent as well, thanks to the recurring fruit taste accompanied by elegant tannins that make it pleasurable despite its intensity.

A young producer in Scansano in search of the longevity in Morellino. In Verona an original vertical tasting of Morellino di Scansano Riserva DOCG Primo was offered (1993 – 2003 – 2007 – 2011 – 2013), which certainly amazed everyone with its courage and expressive qualities. I highlight the 2011, fresh with balsamic notes, agreeable and with good acidity, balanced tannins and a very pleasant mineral note. In the end, an interesting tasting for wines not conceived for prolonged aging, which gives an idea of a territory ready and willing to offer more than just young red wines.