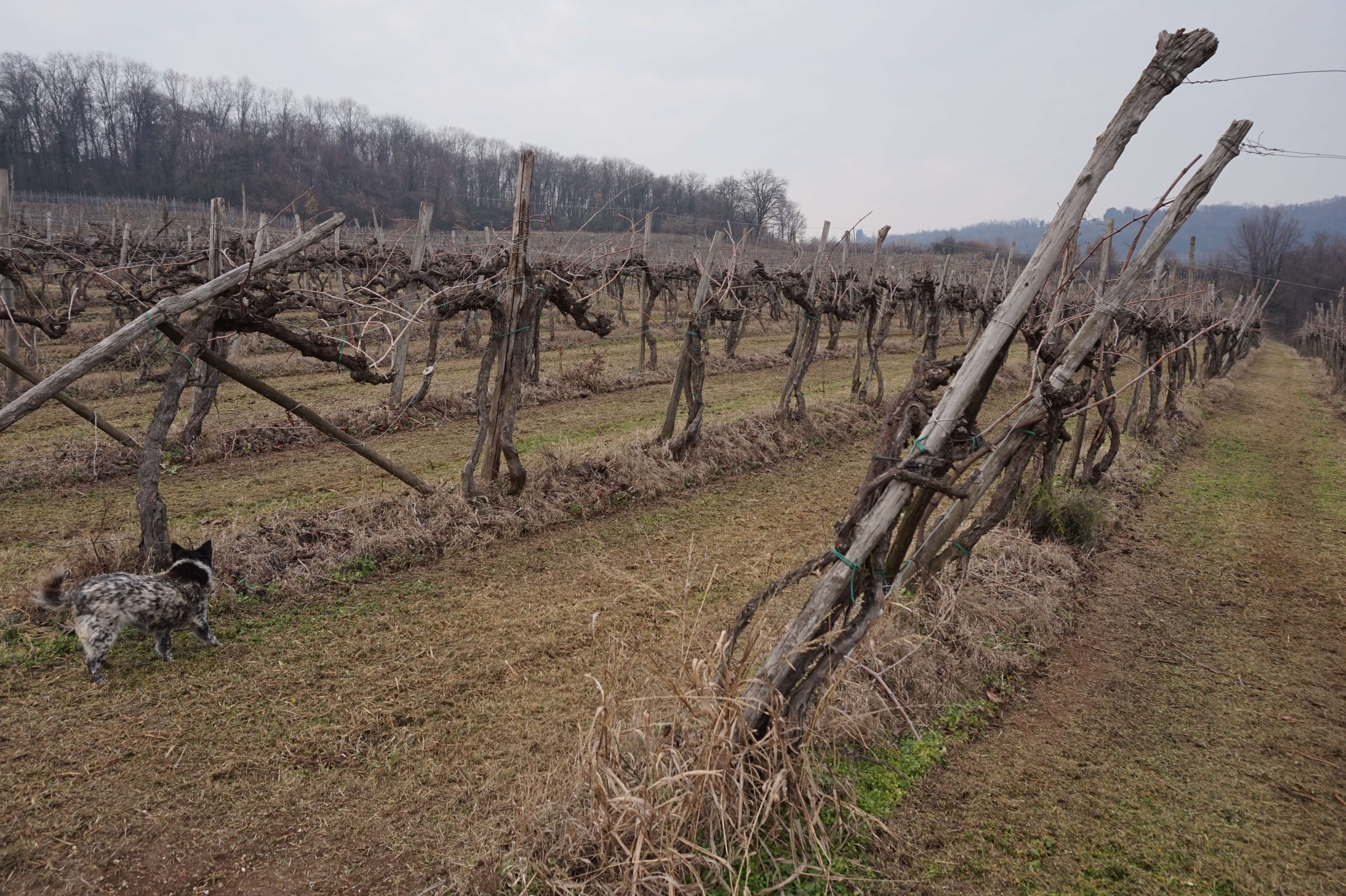 The Italian singer-songwriter Max Gazzé sang, “those in love mustn’t tell anyone”, but this time I want to make an exception and tell you how I fell in love with Tai Rosso dei Colli Berici. The opportunity came during a tour throughout the area situated between the Lessini Mountains, Gambellara, and the Euganean Hills; rolling hills with a distinctive microclimate within the Veneto region, where red grapes find their natural habitat, thanks to a combination of sedimentary and volcanic soils and mild temperatures. Travelling south from Vicenza –after admiring Palladio’s Basilica (aka Basilica Palladiana) – one enters into a territory that vaunts two achievements: the first Cabernet Franc DOC wine and the first Pinot Grigio DOC in Italy. Actually, these are two distinct denominations, Colli Berici (‘Berici Hills’), the first; and Vicenza, the second, which since 2011 have been coordinated and managed by a sole Consortium, “Vini Colli Berici Vicenza”.

With regard to Colli Berici, the data confirm the success of the red wines, which comprise approximately two thirds of the total production with more than 1.7 million bottles produced in 2016 (525,000 were produced under the DOC Vicenza). The most widespread grape varieties are Merlot, followed by Cabernet Sauvignon and Tai Rosso, a native varietal (variation of the original name, “Tocai”, which can no longer be used), but genetically similar to the Sardinian Cannonau, as are Grenache in France and Garnacha in Spain. For this reason, producers in the areas participate in the competition “Grenaches du Monde”, often winning important awards.

So why did I fall in love with Tai Rosso? Because it’s a varietal from which many wines can be produced, each with its own distinctiveness. The traditional version calls for an early harvest so that the wines are acidic and crisp rather than concentrated. Even the color reflects this tendency, as it’s rare to find a cherry-colored Tai Rosso vintage; they tend to be more like rosé. I’m talking about the most traditional versions, those that have always been paired with Sopressa Vicentina DOP and baccalà alla vicentina. But Tai is incredibly resourceful. With attention to the process beginning with the vineyard, selecting calcareous soils with favorable exposition, aged reds can be produced through concentrating and fully ripening the grapes. In this case, classic pairings are the norm: braised meats that combine well with the ripe fruit, which is a stylistic quality of these wines.

Tai Rosso like Verdicchio for whites or Barbera for reds; grapes that are capable of producing both crisp, young wines and wines to store in the cellar. In either case there is a common denominator, but the results are different; and these differences characterize the grapes from their origins. Clearly, the Colli Berici are not just Tai Rosso; there’s Cabernet and Carménère, which are worthy of mention in their own right, as are certain white wines. It’s difficult to tell the whole story in such a brief account, so in order not to bore you, I’ll limit my comments to the producers and the Tai Rosso wines that captivated me above all during this extraordinarily well organized tour led by the Consortium and Studio Cru (not to mention the good company, which never hurts).

A small producer, located in one of the highest areas. A craft outfit, but full of passion. Their labels (new) bear the initials of the grapes that are hand-picked by the owner, because “everything is done by hand in these hills”. Enough said.
Colli Berici DOC Tai Rosso 2015 – This is a “hybrid” Tai Rosso, halfway between tradition (that is, wine that the people of Vicenza used to buy in demijohns and home-bottle) and innovation, because here Tai ripens well. A crisp wine on the palate and the nose, but with peaty hints, balanced tannins and acidity and an incredible 15° of alcohol that go practically unnoticed.

The fascination is that of 19th-century villas of the landed gentry, with age-old cellars where the wine matures in barrels. This is a flat area that speaks of concentrated versions, among others.
Colli Berici Doc Tai Rosso “Thovara” 2007 – at dinner, properly refrigerated, here we savor a noble red wine, replete with ripe fruit notes, small dark fruits and tertiary notes on the nose that are incredibly exhilarating. In the mouth the intensity continues, layered and persistent, together with characteristic acidity. It won the Silver Medal at “Grenaches du Monde” 2013.

A large and historic producer located between Gambellara (their Recioto combines tradition and taste at a very high level) and Colli Berici, where it produces wines using international grape varieties and an easy-drinking Tai Rosso.
Colli Berici Doc Tai Rosso “Corallo” 2016 – As its name states, this is a lively and young Tai with rose and vegetal notes combined with cinder and iron on the nose, whereas in the mouth it is very crisp with a slightly abrasive tannin (young, to be sure, but after all it is a Tai!).

Here, too, the producer and the cellar are technically outside the Colli Berici (as with Cavazza, we’re in the area of Gambellara, where exceptional dessert wines are produced, specifically Vin Santo), but the productive drive toward noble reds is even higher. Two versions of Tai Rosso; the first, Monte Mitorio, which, despite its being the younger and rounder of the two, won the Gold Medal at “Grenaches du Monde” in 2017. Following is the second, concentrated version.
Colli Berici Doc Tai Rosso “Colpizzarda” 2015 – Spice and face powder warm the nose, but even nail polish, for an elegant complexity, the result of which are the sixteen months’ ageing in barriques. On the mouth, the tannins are perfectly balanced, combined with excellent acidity and a finish worthy of a noble wine. Colpizzarda won the Silver Medal at “Grenaches du Monde” 2017.