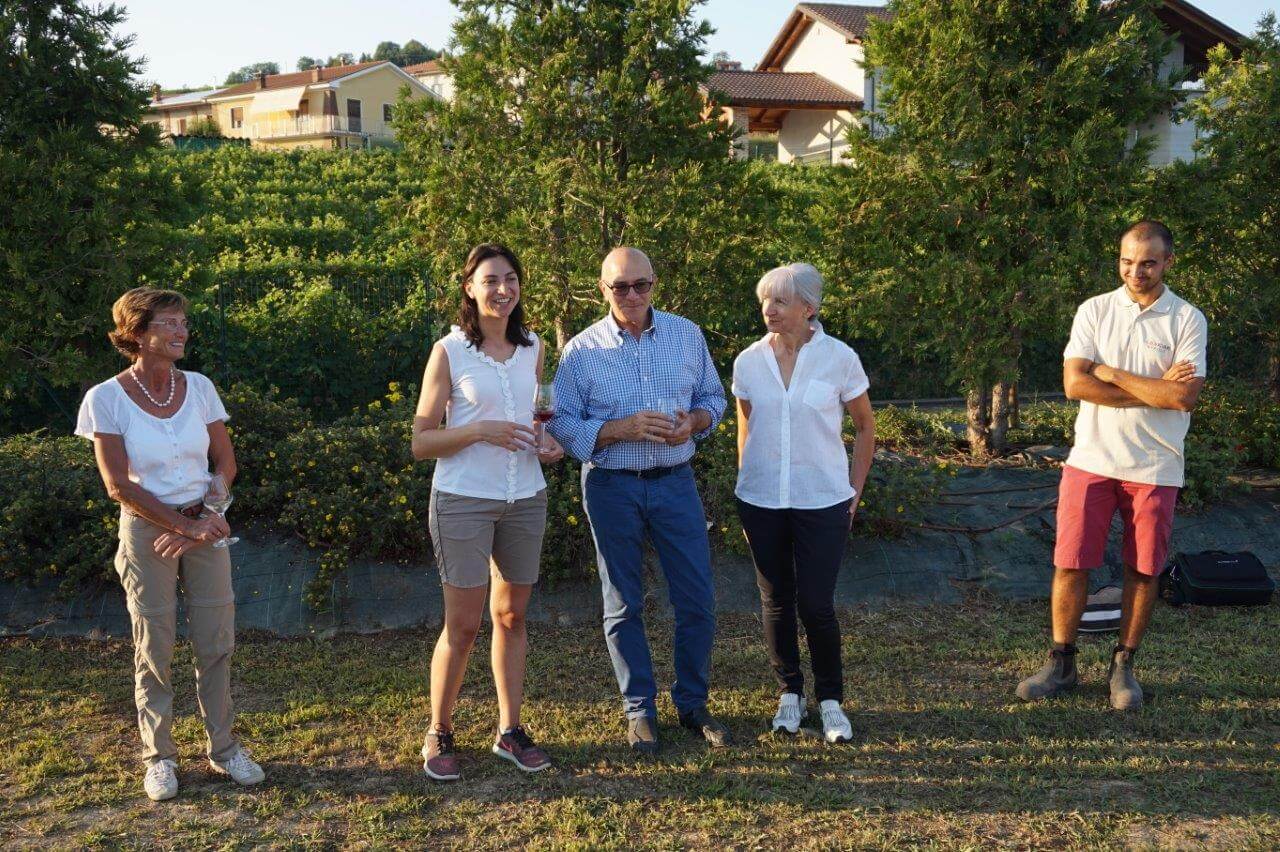 Learning through play: You can with Vajra’s Ampelo Contest

On the instruction manual that they gave us it’s written as two words, “Ampelo Contest”, but I think it can also be written as “Ampelocontest”. This is the game invented by the Vaira family, with the collaboration of a fine academic such as Prof. Anna Schneider, to explain something new about the Langhe region and Barolo to attendees of the Progetto Vino di Collisioni 2017.

THE THEME: recognize grape varieties by the plant and then the wines that derive from them in a blind tasting (ok, the tasting has little to do with ampelography, but we like to drink wine, not eat leaves . . .)

THE SEQUENCE OF EVENTS: We all meet atop the Bricco delle Viole, and after having regained our senses – which we had lost after the breathtaking view from that height – here comes smiling Professor Schneider who, with the help of Isidoro Vaira, explains to us and shows us the various typologies of leaves and bunches (it’s July) that were gathered from the vineyard. Nebbiolo in its three varieties (Lampia, Michet, Rosé), then Dolcetto and Barbera, but even Sauvignon and others. Francesca Vaira explains the rules of the game, shows us the map that we’ll follow to reach the vines that we must recognize (properly marked), and then forms the teams and assigns a team leader. We get Isidoro. Isi for his friends.

Bottles of fresh water in hand, anyone who wants to throw on a pair of comfortable shoes provided by the Vaira family (looking back, maybe I should have taken the offer, considering I was breaking in a pair of sneakers for the first time that day!) and then . . . go! Off to the vineyards!

I shouldn’t say it, but our team was the strongest and the most compact. We followed carefully all of the explanations (some more, some less, to be honest), and Isi proved to be a perfect team leader with our same enthusiasm for winning. The final result bears us out, as we came in first on the ampelographic part. The tasting didn’t go quite as well. After all, the winners had Rocco Lettieri on their team, a champion who was able to recognize not only the different grape varieties in the various wines that were tasted, but also that they were all from the same year. Not bad at all. We saved our honor, even if I had already prepared my comment in English to celebrate taking first place: “It wasn’t easy, but we had Isi!”.

I’ll tell you what I learned from that afternoon and the evening spent with the Vaira family. First of all, that we felt “at home”, because the Vaira family considers those vineyards and their work as a family endeavor, even if the size of the company necessitates external help. Upon our arrival, we were greeted by Isi’s and Francesca’s parents, Aldo and Milena; the eldest sibling Giuseppe wasn’t present, as he was working outside Italy. We breathed an air of “family”, whether with Professor Schneider or the workers in the vineyards, not to mention who had “entrusted” them with the vineyard. I’m talking about “Luigi Baudana” winery, an important name for Barolo and what elsewhere would be called a recent “acquisition” by G.D. Vajra winery. Luigi Baudana was with us at dinner that evening and was praised for the work he had done. He was invited to speak by Aldo Vaira, who feels the responsibility of having received those vineyards and that name to uphold. In this extraordinary moment I witnessed respect, trust and sincerity . . . values that transform a great producer into a family enterprise in the true sense of the word.

Immaterial values, in part, but as I wrote in a previous post, if the people who make wine, exceptional wine in this case, are able to transmit something positive (which is not something anyone can learn; it’s innate), the final sensation is that of having reached higher ground.

That said, why not say a bit about the fine work done with the contest. Ampelography is perhaps the most forgotten of all specializations that are at the foundation of winemaking. Starting from that point, getting your hands and feet dirty, is a way to stress the concept that everything starts from the land and the vineyard. The advantage for us, after many hours spent in the tasting rooms (a wonderful, but tiring thing to do) was at once physical and mental. We began to build our confidence with the principles of ampelographic observation techniques such as the tomentous parts of various vine stocks, the shape of the leaves, the shape of the petiole sinus and lateral sinus, the shape of the teeth of the leaves, the profile of the blade in cross section, the density of prostrate hairs, the shape of the ripe bunch and berry length. A quick summary for about ten varieties, but which was eye opening in terms of just how vast the world of viticulture is, even to those who were less interested. An exceptional gift.

Speaking of gifts, I’d like to mention the t-shirt with the G.D. Vajra logo that I put on after working in the vineyard, the cherry tomatoes and basil picked straight from the garden in front of the dinner table and eaten as hors-d’oeuvres, and the genuine smiles of everyone in the Vaira family.

>>> Download - PDF - Learning through play: You can with Vajra's Ampelo Contest

Una replica a “Learning through play: You can with Vajra’s Ampelo Contest”