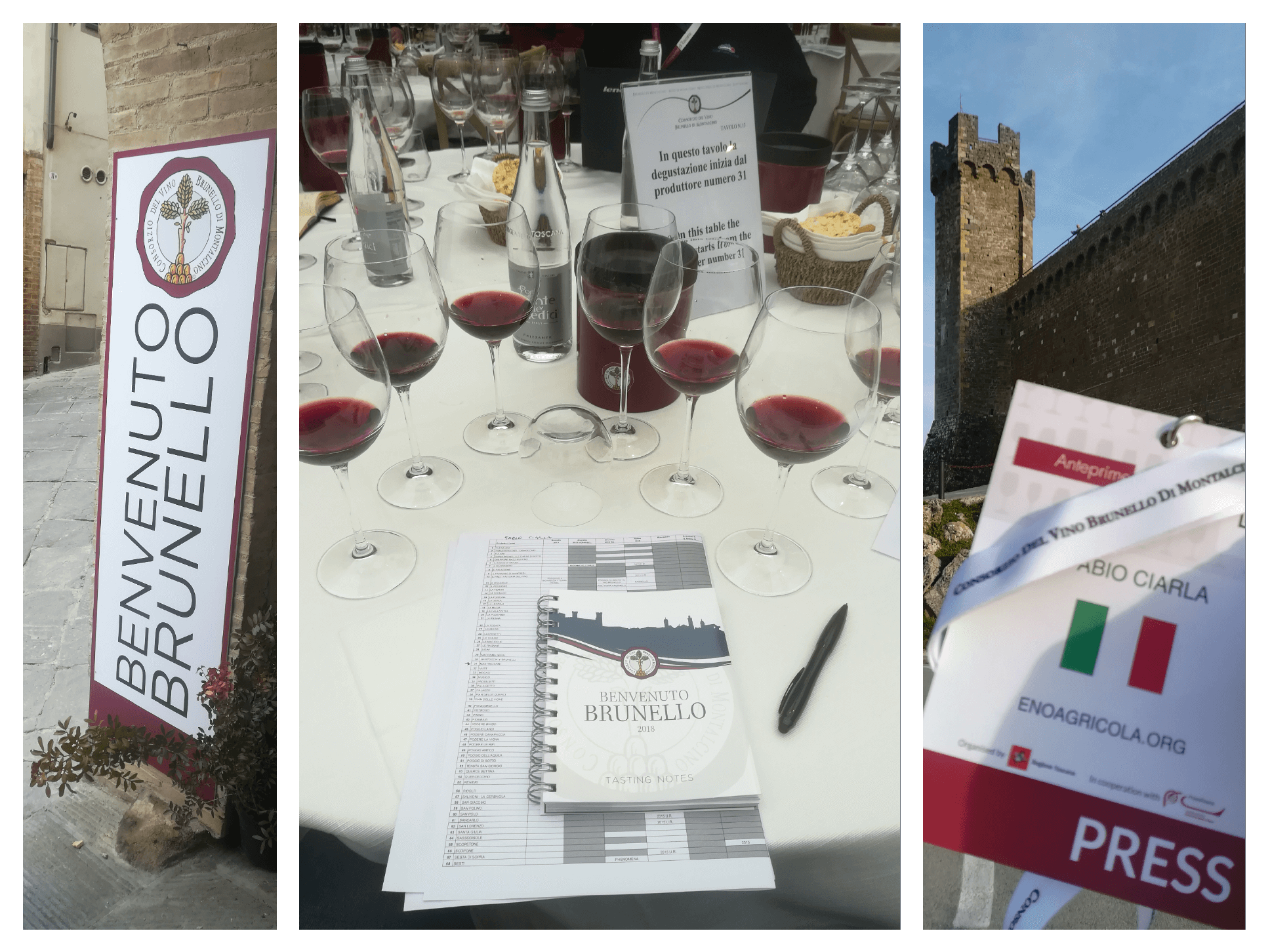 Welcome to a memorable year. We’re talking about Brunello di Montalcino DOCG 2013, presented officially at the event “Benvenuto Brunello 2018”, which concluded a week of Tuscan previews February 16-18. Everyone’s calling it a very interesting year for this wine, which will continue to age well with absolute peak quality. Riserva 2012 is exciting as well, though it currently isn’t at its full potential (so don’t drink it now; wait a few years), as is the Rosso di Montalcino 2016; these the other two official previews that I tasted with Italian and international colleagues in the breathtaking Chiostro di Sant’Agostino. One hundred thirty-five producers, with various “Vigna” or “Selezione” denominations, as well as Moscadello and Sant’Antimo (the other DOC wines from Montalcino). Hundreds of bottles skillfully managed by AIS sommeliers in a day dedicated to the media without the presence of the producers. A rare if not distinctive moment to appreciate several wines, but also a serious commitment on behalf of the Consorzio del Vino Brunello di Montalcino and its press agency, to whom I am eternally grateful (as well as the producers).

Before considering the vintages and producers, I’d like to be clear on a few points. The first is that in a single day it’s impossible, given time and physical limits, to manage to taste everything; in my case, because I wasn’t able to spend two days at the event, I necessarily had to be selective. This is precisely what I’ve tried to accomplish, with regard to producers and their products alike, while not passing over the opportunity to taste something new, with the delight that accompanies it. The second is a personal consideration; that is, the presence of two producers whose consulting enologist is my brother Valentino. Though I personally have no formal relationship with them (in one case I’ve never even met the owner), I nonetheless have preferred not to include them in my personal, public classification, even if I believe that both of them are deserving.

Considered to be a classic vintage, this is rewarding and expressive wine, but also original. An impressive red, imposing but not heavy, with various subtleties of the territory that come through. It’s now time to begin to define, officially and closely, the area of Montalcino, as there are several differences among soils, exposures and altitudes within the production zone. The aroma is characterized by red fruits, but also cipria (similar to talcum powder), even floral in some cases; whereas in the mouth it is persistent, but also reined in by balanced acidity and body.

It seemed to need a jump-start compared to the Brunello, but it has greater longevity – as one would expect. It currently seems not to yield its best expression, with grippy, almost imposing tannins. What currently seems problematic, however, will likely become an advantage, as its evolution follows the sinusoidal progression of wine, with peaks and valleys during the ageing process. It’s also the case that some producers are limiting the availability of the Riserva on the market, as they move into their sixth year from the vintage.

Not a younger brother of Brunello, but another wine. This year is precisely fresh, pleasant, intense and bold. It’s a drinkable wine, an expression of the territory that’s less austere than the Brunello. The fruit is fresh in this case, both on the nose and the palate, while its savory quality reins over the acidity. Subtle, but valid balance.

The top tastings of Enoagricola (random)

Brunello di Montalcino Docg 2013 – Franco Pacenti Canalicchio
Superb aromas, with tertiary aromas in the lead. Charming. Perfectly satisfying on the palate, but a bit more persistence would have made it even better.

Brunello di Montalcino Docg Bionasega 2013 – Il Poggiolo
Complex on the nose and very expressive; fresh and savory in the mouth as subtleties continue to emerge.

Brunello di Montalcino Docg 2013 – La Fiorita
Ripe and complex fruit on the nose, the impact on the palate is pleasant; easily drinkable, with good overall balance.

Brunello di Montalcino Docg 2013 – Salvioni La Cerbaiola
Rich and replete with subtleties on the nose, pleasant and balanced on the palate; distinct elegance.

Brunello di Montalcino Docg 2013 – Tenuta di Sesta
Fresh with evident mineral notes, it nonetheless maintains balance with its austere characteristics on the nose and the palate.

Brunello di Montalcino Docg 2013 – Tenute Silvio Nardi
Pleasant and interesting on the nose with fruit and fresh mineral accents; warm in the mouth with bold tannins and a persistent finish.

Brunello di Montalcino Docg 2013 – Cupano
Interesting on the nose with ripe and elegant red fruit; distinctive and balanced on the palate with a long finish.

Brunello di Montalcino Docg Riserva “Duelecci Ovest” 2012 – Tenuta di Sesta
The freshness of this riserva is in line with its general intensity; juicy in the mouth and pleasant, persistent.

Brunello di Montalcino Docg Riserva 2012 – Tenute Silvio Nardi
The stylistics of this producer come through in this riserva; elegant and complex on the nose, persistent on the palate and elegant with velvety tannins and character destined to stand the test of time.

Brunello di Montalcino Docg Riserva 2012 – Caparzo
Pleasant and intense, with bold fruit on the nose and just enough freshness; pleasant on the palate with distinct tannins, but with a finish that could last just a bit longer.

Brunello di Montalcino Docg Riserva 2012 – Elia Palazzesi Collelceto
Complex fruit on the nose; pleasant on the palate, given the balance between sweet and savory; good, but with ample margin to mature.